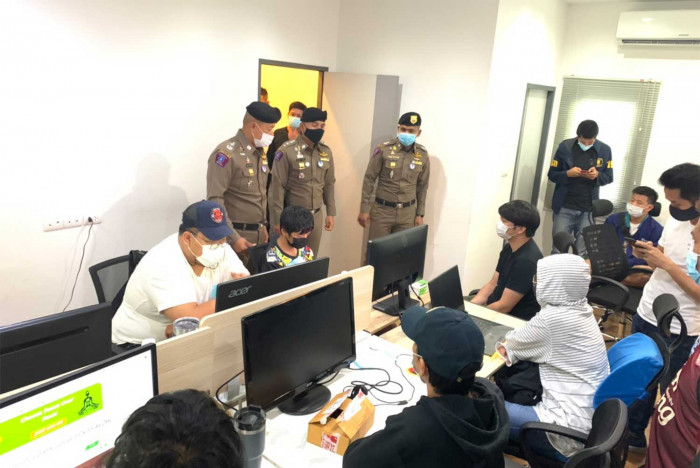 Police from the Patrol and Special Operation Division arrest 13 people accepting bets online, on the second-floor of a house in Bangkok’s Lat Phrao district, on Tuesday. (Supplied photo via Wassayos Ngamkham)

They arrested 8 men and 5 women and seized 14 computers, 2 printers, 2 internet routers, 6 bank account books and the recording system of a security camera set up.

Pol Maj Gen Somboon said they were acting on information that betting on underground lotteries via a website was being run from the house. The investigators obtained a court search warrant and entered the premises. They found people accepting bets on the second-floor.

One of he 13 people arrested, Paweenat Kasemsaruan, 31, admitted to being the caretaker of the house.

The suspects confessed they had rented the house for 30,000 baht a month and used it as a base for an underground lottery betting operation for the last five months.

They used social media channels such as Facebook and Line chat to get customers.

They took bets for underground lotteries in Thailand, Laos, Vietnam and Malaysia, and also took bets on share index movements, with 7.5 million baht currently in circulation.

Police charged them with colluding in running an online gambling operation or persuading people either directly or indirectly to bet, and illegal assembly in violation of the emergency decree.

All were handed over to Chokechai police for legal acton.

Do not financial institution on utilizing credit score, debit card for...